So how did I get here?  What went well, what didn’t go so well and a few reflections. 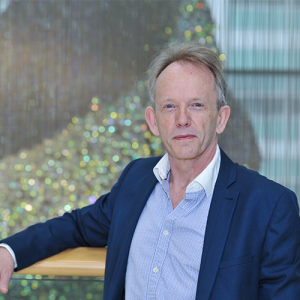 My first job was as a plasters’ mate working school holidays on the renovation of a Tudor yeoman farmers house. This was an interesting way to start working, learning how to work as part of a team and developing a lifelong skill in plastering!

At 18, I headed off to Queen Mary College, University of London (QMUL as it is now) to study Physics and Electronics. I had the fabulous benefit of being able to work all my vacations in the Research Group at Sony Broadcast & Communications as a technician wiring circuit boards, writing bespoke software in Fortran and Basic, lugging around heavy bits of prototype broadcast equipment and other fun things. I have maintained my links with QMC/QMUL serving since 2011 as member of the Industrial Advisory Board for the School of Electronic Engineering and Computer Science, and receiving an honorary Doctor of Science in 2014.

This led to a full time role following university.  Over the next 5 years I worked on some of the most innovative projects in broadcast technology just at the start of the shift from analogue to digital TV. During my time at Sony, I also had the opportunity to successfully complete a part-time MSc in Computer Science at Brunel University. As with QMUL, I continue to maintain my links with Brunel and had the privilege of being appointed as a Visiting Professor in October this year.

Sony was an amazing place to work providing an insight into collaborative international work (with peer labs in Japan and the US), great foundational technical skills but also how not to handle work/life balance!  After a particularly demanding period, where we built the very first ever HDTV digital effects system,  regularly working “all nighters” and sleeping at the desk when others were debugging, I decided other priorities matters such as seeing my wife, playing music and having a regular sleep pattern (or indeed showers)!

It was now off to Stewart Hughes Limited to work on Helicopter Health Diagnostics.  Did I know anything about helicopters?  Absolutely nothing but many skills are transferable and it is fun to learn a new area.  We were a small team split between Southampton and San Diego.  My two years at SHL included 3 months in Pacific Beach, San Diego – well recommended and a month in Stavanger, Norway (in January) in an aircraft hanger – less recommended.  This provided me new skills from working abroad and my first exposure to the intricacies of Intellectual Property (IP) as a result of a complex patent dispute. Working in an SME was a different experience.

The opportunities for career growth at SHL were limited, so I decided I needed to move back to a larger organisation, joining Digital Equipment Corporation (DEC) as a software engineer.  Initially doing consultancy with business partners, I then moved into the UNIX Engineering Group to work on DEC’s UNIX development and then into technical leadership eventually being promoted to Consulting Engineer, leading the technical strategy for the Commercial Unix Products Group, splitting my team equally between Reading in the UK and Nashua, New Hampshire in the USA.

Here I had my first exposure to Mergers and Acquisitions as we looked to both divest certain products and build alliances including with IBM – this is where I also first crossed paths with our HDR UK Board Chair, Graham Spittle on opposite sides of the negotiating table.  I also had the opportunity to further enhance my IP skills as a bit-player on the side of the DEC/Microsoft dispute over the kernel of Windows NT operating system.  An incredible dispute to observe, which resulted in one of the largest ever IP settlements.  A salutary lesson that not respecting IP can be very costly.

Compaq acquired DEC at the start of 1998 and the culture changed from being very open (indeed often chaotic) to micro-managed (timesheets at 15 minutes granularity); it was time to move again.  However my 11 years at DEC were great, I grew my technical skills, took on my first management roles and established a broad network which I still use today.  Indeed one of my managers from DEC remains a mentor for those times I need a big picture independent view on career decisions and challenges.

My next 17 years were based at IBM Hursley. I joined as a technical strategist, a role I never really did as on day one I was seconded out to a different role to fix issues in one of the development teams and then taking over as a team lead for a new product offering.  After 5 years in technical roles and without clarity of career path I was becoming frustrated, so on the recommendation of my manager I took another secondment to a business development role, my one and only experience of a job that carried a sales quota.  That year taught me how to develop and manage business relationships.

Returning to development, I moved into a management role.  Progressively I took a number of larger management roles which included adding the responsibility for IP development for IBM’s UK&I labs.  Eventually somehow this lead to promotion to my first executive position as Director and CTO of Messaging Products (a position Graham had previously held) and then onto Vice President with responsibility for the WebSphere Application Server and Rational Tools Products. This was the toughest role of my career, with responsibility for 750 staff across 17 labs in 11 countries, including both development and 24*7*365 customer support. The hardest challenge however was to transform the business by divesting the majority of the Rational Tools portfolio.  This led to new skills in business partnership but also new, and some cases really hard, experiences in personnel management.  My final role before ‘retiring’ from IBM was leading an internal start-up as Vice President for Event Services covering IBMs open source development of serverless computing and Kafka based messaging.

In addition to my core roles at IBM, I had the opportunity to lead some key work with academia as the IBM executive manager for the relationships with the University of York and the QMUL, and as an academic accessor for the British Computer Society.  These ‘give-back’ opportunity were a key part for me of my personal development.  My years at IBM also gave me many opportunities, some welcome and some less so, to development management skills.

Following my retirement from IBM, I was enjoying a rest and doing some consultancy with a couple of SportTech start-ups, when Graham approached me to join this new organisation, HDR UK, as their interim CTO on a part-time one year basis. Three and half years on I am still here.  Why?  I believe in our mission and values but there is also so much still to learn.  Health data was a new domain (another one!) to me and the style of organisation was very different.  I have also had the chance to work with some excellent leaders such as Andrew and Caroline, and to learn from their approaches.  DARE UK is yet another new challenge.  Never stop learning!